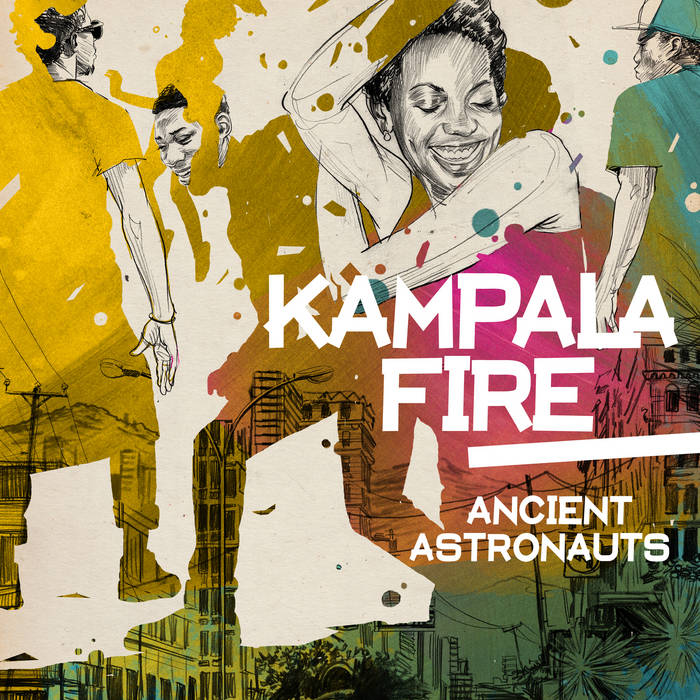 Few releases coming out of Africa this year promise as much as the ZIK ZAK album from ANCIENT ASTRONAUTS, featuring underground artists from all sides of the continent, coupled with world-class production from the veteran German producers. Blazing ahead of this African Odyssey comes the KAMPALA FIRE EP, showcasing a selection of strictly Ugandan tracks from the album: Roots Reggae, Dancehall and Hip Hop from one of the most energetic and original music scenes on the continent.

Chanting in Luganda and English, C WYNE NALUKALALA opens the set with a rebel salute to the youth. This is most relevant in a country where the majority are under 21 and the country’s dictatorship has ruled for over 35 years. Though his name means “Troublemaker”, C Wyne is a respected cultural leader in the ghettos of Kireka, spreading a positive social and political message with his tough Dancehall style.

On DDALA (meaning “Real”), SPYDA MC drops his “Lugaflow” in the local Hip Hop vernacular. The rapper-Rasta exhorts us to stay authentic and not hide behind fake titles. SPYDA is a member of Rasta drummers NILOTIKA CULTURAL ENSEMBLE and Hip Hop crew CYPHER KABAKA, mixing enlightened spirituality with the grit of the African street.
BANI Fyah and BLESSED SAN both hail from the musical melting pot of South-Eastern Kampala, where they dominate the popular all-night Reggae sessions. BANI FYAH drops lyrics condemning slackness and corruption, while freestyle lunatic BLESSED SAN mashes up the scene like Idi Amin.

The sound of the forest and tribal drumming brings us back to the Nile - the cradle of humanity - in the Dub-drenched stoner’s delight SOURCE OF LIFE by the Rasta drum circle NILOTIKA CULTURAL ENSEMBLE. Uganda is where the Rastafarian Nyabingi culture originates, taking its name and culture from an ancient East African warrior queen. Nyabingi’s resonance can be heard throughout this EP, but most especially in this deep, spiritual Roots track.

ANCIENT ASTRONAUTS describe their music as “Boom Dub”, a fusion of Boom Bap and Dub Reggae. Across this ground-breaking Afro-European EP they infuse Roots, Hip Hop and Bashment with their Orientalist, dubwise style. Life-long followers of Nyabingi music, ANCIENT ASTRONAUTS apply its percussive and hypnotic sounds to each of these tracks, adding a timeless and organic quality to contemporary urban music.

All the vocal recordings were done at the studio of their long-term partners, East African Records (EAR), a community-based organisation in Kampala that supports upcoming artists. The KAMPALA FIRE EP is a testament to the heights that can be achieved when ground-breaking international production is applied to one of the most energetic urban music scenes in Africa.

All music written and composed by Ingo Moell. Mixed by Kabanjak. Produced by Ancient Astronauts.