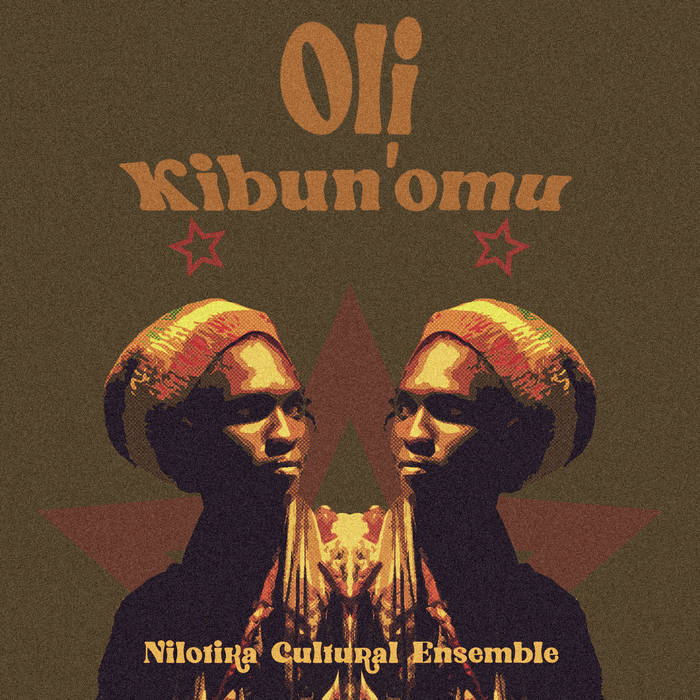 Voiced by the honey-toned Nsonga, the chorus of OLI KIBUN'OMU sings of a beautiful maiden who appears to the Rasta like a shooting star. Only he can see her beauty and if he tells another of her appearance, she will be gone. Opening with a hypnotic rhythm plucked on a giant bass adungu (Ugandan harp), this soothing lullaby builds gradually with the rich harmonies of the Nilotika vocal choir and the insistent percussion of twenty hands drumming in unison. Chirpy trumpet notes and tenor adungu chops complete this impossibly sweet song: at once love poem, at once timeless Roots Reggae classic.

The songs from NYABINGI RESURRECTION are performed by the fifteen-piece Nilotika Cultural Ensemble using only traditional Ugandan instruments and no electrified bass, guitars, modern drumkit, etc. This is original roots music from the cradle of mankind: the source of the Nile in East Africa.

Switchstance Recordings (DE) and East African Records (Uganda) have worked with Nilotika Cultural Ensemble to record - for the first time ever - an African Nyabingi musical session in the birthplace of the Nyabingi movement.

Nilotika Cultural Ensemble are a traditional drumming group from the kingdom of Buganda. Besides perpetuating the music of their ancestors, they have recently branched into more modern forms, with releases on Nyege Tapes and Crammed Discs that have received top reviews in international media.

Nyabingi (or Nyabinghi) is one of the Mansions of Rastafari, which worships and achieves enlightenment through drumming and righteous living. The Mansion takes its name from the 18th century warrior queen Nyabingi, ruler of an east African kingdom. After being murdered in a royal dispute, a religion formed around her spirit that inspired anti -colonial revolts all over the region. Nyabingi’s followers used intense drumming to terrify the colonial authorities and their collaborators.

Her spirit was said to have possessed Queen Muhumusa in the late 19th century, so feared that she was imprisoned for life and a ban on drumming was imposed by the authorities.

A century and a half later, the descendants of Nyabingi are still drumming in the same region of East Africa. One of the most notable groups are Nilotika Tugifa aka Nilotika Cultural Ensemble, led by Jajja Kalanda. The patterns and instruments they use are the same as their Nyabingi ancestors, but they have evolved and developed their technique, notably including Caribbean sounds and styles influenced by the Mansion of Rasta that adopted their name. Like the Rastas, Nilotika’s culture embraces artistic creativity, community values and clean living as an alternative to the corruption and capitalism prevalent in mainstream Ugandan society.