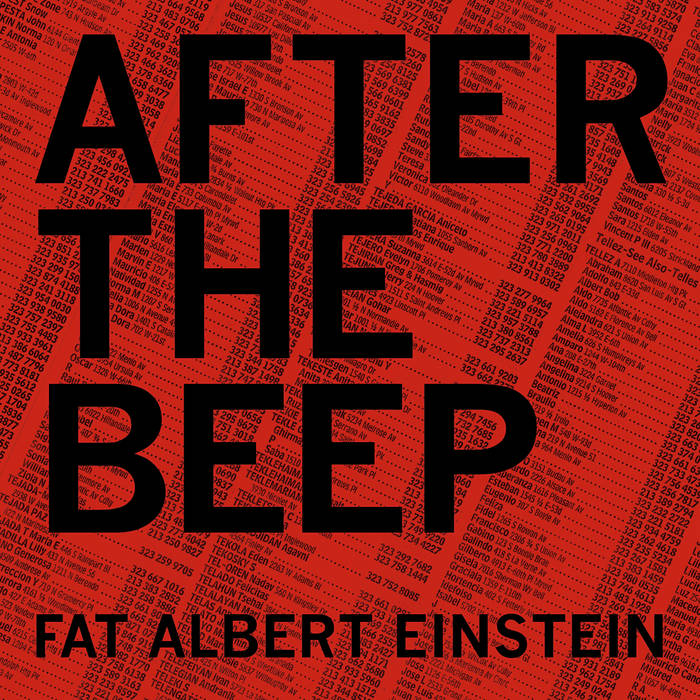 “After the Beep” is an audio “on the road” trip for the beats generation (from DJ Premier to J Dilla), except there's no drum machines here. Fat Albert Einstein brings all live instrumentation including bass, drums, keys, guitars, percussion and melodica, creating rhythm heavy compositions laced with loose melodies to nod your head to. These songs are bookended with old answering machine messages collected at thrift stores over the years, creating a soundtrack, both laid back and voyeuristic. Fat Al's first melodica was purchased while hitchhiking through Michuacan, in ‘96. This instrument became his companion on the road...


In the mid to late 90's I started hitchhiking in Mexico, between Nayarit and Michuacan, surfboard and melodica in hand, learning to love the road and the many lessons it has to teach. Further traveling led to thumbing the West Coast; Mexico, San Diego, Los Angeles, Oregon, Washington and on to British
Columbia, working random day labor to support hand to mouth lifestyle. “ARMS REACH” was the motto.

I always traveled with a hand held cassette recorder, the kind with a speaker on it, so i could bump mix tapes on the road, as well as create crude field recordings, documenting my travels. As I was always scouring thrift stores for cassettes, I fell in love with the intimacy of old discarded answering machine tapes. This became an obsession for over 15 years now. A cassette player, phone tapes and recently made recordings were welcome friends to the solitude and serenity of the road. Given the chance encounter of a buddy with a drum kit I would bang out some beats and record them to later play back in my tent and work out melodica compositions.


There's nothing quite as strange as hearing your voice on tape for the first time. Since I was a kid the fascination with homemade cassettes tapes has been a driving creative force in exploration of sound, which much later led to recording music. With the dawn of answering machines, the ability to record a
greeting to be heard by a small audience had sparked further interest in recording . This was a major force that offered limitless possibilities for a young lad like myself; the funnier the greeting the funnier the message. Call and response, in its most juvenile form. The fact that i could make a new greeting at
will made for more creative forms of expression, as long as my parents were game.


"After the Beep" is a return to my roots of sorts. It is also a door to those rare private moments we never thought would go beyond the closed quarters of home. It is a document of Post-Modern Americana that rings true in the hearts of all.

"The fact that Fat Al weaved ACTUAL messages off of answering machine cassettes throughout AFTER THE BEEP, that he collected while drifting across the states and Canada in itself makes it worth a listen. And after that first listen, there will be many more. Very impressive. Look forward to hearing collaborative efforts from me and Fat Al sooner than later..." - House Shoes


"After The Beep is pure analog voyeurism. It’s like Fat Albert Einstein dragged some dirty drums through the private press recording trimmings left on a cutting room floor. It reminds you of tape reels of all sizes and magnets and cords that tangle easily. But even though it pays tribute to an earlier era, the music is as progressive and funky as anything out there. Props to Switchstance Recordings for making this project available to the masses." – Kone


"This is a prime example of what liner notes are for. Once I read about the story behind this release, it made me love it even more. It's personal and it's real. These are the bumpy, dirty grooves in the road, on the journey of a young man's life." - Jeremy Sole (KCRW, theLIFT, Afro Funké, Musaics)


“Nice and deep. Reminds me of the very good times of Clutchy Hopkins. Big ups!“ – Cayetano